Yesterday evening I had the chance to take a first look on data the Web Summit databases provides for participants. I took some time to dive in deeper into one of our sectors - software as a service in (SaaS). Of course, one has to keep in mind that the data from the Web Summit is not fully representative as there is the conference participant bias. But I think it still provides a good general snapshot about the state of SaaS in Europe and Germany. This article will walk you through to some numbers and important insights you can derive from that.

A snapshot of the European SaaS space (participating in Web Summit)

First a general description of the data: There are 72 SaaS companies out of 2083 startups that included the term SaaS or software as a service in their description. This is a rate of only 3.5%.
It might come as a big surprise for many used to the slogan "SaaS is everywhere and the future", and given it is an exclusively web conference. I think it fairly reflects the fact that - albeit SaaS is a very interesting business model - it is also a very demanding place for startups to be. And I am not even talking about the king's class, which is enterprise SaaS. 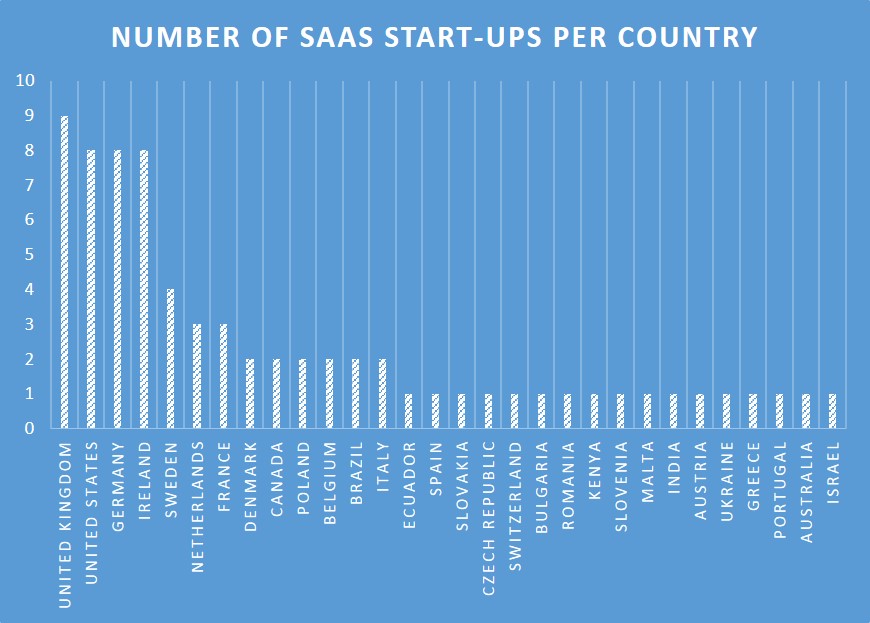 Then we come to a second interesting aspect, country distribution, meaning where the startups are coming from.
My expectation has been to see a skewed distribution towards participants from the US, and a wider range but much lesser numbers coming from all of Europe. I would have also guessed to see Germany in the lead in Europe.

In general, the data confirm this expectation. But there are also some surprises. First comes the United Kingdom with nine, followed by United States with eight, Germany eight, then Ireland with eight and Sweden with four participating ventures. Then we have the long tail composed by many European and non-EU countries only one or two participants come from.

It is surprising that Ireland sends so many companies in here as you would expect few SaaS companies, given the size of the country with all implications for the available talent pool. But I think it has it is a very well explained with the selection bias and geographical closeness bias since the conference takes place in Dublin. I think the same argument applies to some degree to the United Kingdom.

As such, the high number of US companies does not come as a surprise, while Germany confirms the expectation. In addition, Sweden basically confirms the general perception that a lot of interesting stuff is going on in IT in the Nordics (we often do not read about at least in Germany).
I was a bit surprised that France is only sending three SaaS companies, as I thought that thanks to LeWeb and the IT hotspots in Paris would produce more in this field (you could also base it on population, but I leave it to another post).

As I have been invited for media coverage and I am always curios I decided to not focus on interviews with speakers but give you - the start-ups - a voice.
Just fill in the form and tell me, why you should be interviewed or we should meet. I am not interested in product pitches alone, but also in the problem you solve and how your solution fits in our today's context.

Although the available funding data is a very high level, scratching on the surface approach, you still get general trends and the state of art out of it. There is one indication I always watch out for. It is the2.5 million average I deem necessary to get a SaaS project really started based on experience and benchmarks.
With that to the available data: Only one participant did not disclose the range of funding. 56 of the company's (meaning 78%) funding ranges between zero and €500,000. Three (4,17%) have 500k to 1 Mio. Nine (12,5%) startups then have funding between 1 million and 3 million so they are getting close to the minimum. Only three (4,17%) companies are in the field of 3 million+ funding,

Making sense of this funding data 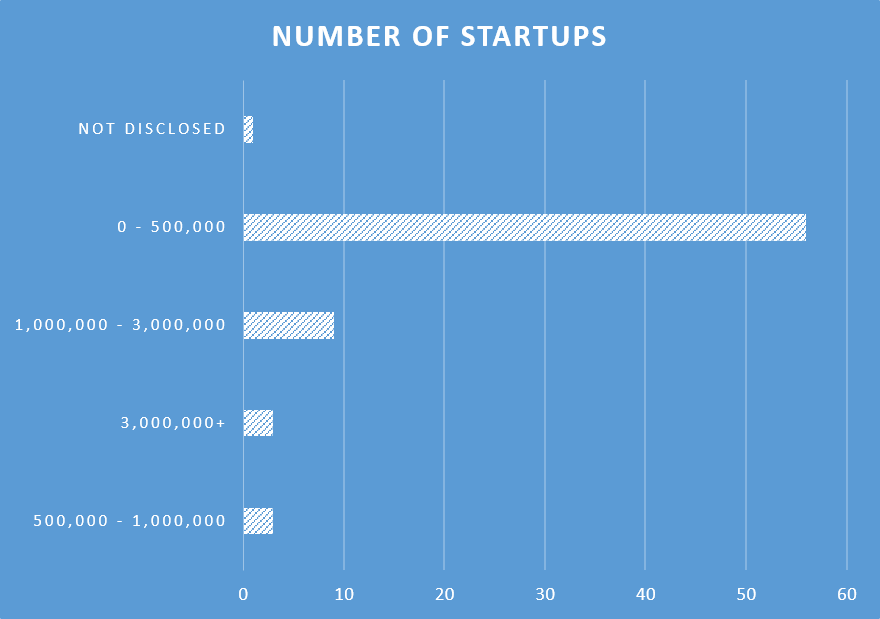 I think you can interpret these data points as a general trend I have been observing over the last years. It became easier to get to seed money or angel investments. Thus, it is no surprise to find a large number in the lower range. This brings me to a potential problem in the current environment and within the cycle. Today seed money is not always good. Business projects are funded to start, gain some traction but never have the minimum requirement of capital to be at least on par with competitors in SaaS nor do they get a series A. This point is based on benchmarking the capital needs of successful ebterprise SaaS companies from start to the IPO. These are simply higher, and thus funding needs are not driven by some irrational founders' expectancy about valuation in a unicorn world.

One might argue that these companies are still in the product market fit phase, where it might be an efficient level of capital to run. They bring up a valid argument.
On a general level, we should not forget that when we talk about enterprise SaaS the capital requirements you have to build a minimum viable product are higher. The reason is that you cannot concentrate only on two or three killer features, but existing processes and workflow has to be taken into consideration.

As another indicator, I checked the origin of the 3+ million funded start-ups. I was no surprise to find two American companies on the list, which I interpret as a confirmation of the fact again that U.S.-SaaS is way ahead of Europe. As a surprise, we find one Italian company in the range founded recently (2013).

There is an easy explanation given the fact that the company "Spaziodati" is coming from Trento. Trento is an interesting place in Italy that installed a program Trento Rise. This is a public program offering a lot to get the city and the province positioned as regional start-up hub. It is not the place here to discuss about the Trento approach towards starting their ecosystem and the story of how this fits into European innovation ecosystem debate, albeit it is very interesting. With this background knowledge there is no surprise to see TrentoRise as a seed investor together with the Chamber of Commerce Pisa with up to 1,2 Mio. But, they also got a Series A (1.8 Mio) from a private investor. I will try to get the founders commenting on that maybe during that Summit.

In the tier of 1 to 3 Mio. We find three German companies two Swedish companies and the rest from all of Europe. Seems in line with the local realities.

In conclusion: The funding numbers are to some degree in line with what you would expect, but you can also see that funding for SaaS is possible in Europe today on several rounds in several places and from very different sources.

I decided to dig into the German companies for this article, as everybody is talking about Berlin as the number one startup hub. As written above there are eight SaaS start-ups.
Here comes the first surprise: Out of these companies doing SaaS in Germany and participating in the conference, only one company is from Berlin. In addition, their website states only that they are doing SaaS sales leaving it unclear whether they really offer a software solution to rent for this.

The reminder of the SaaS start-ups is from Hamburg (2x), Cologne, Bielefeld, Ingelheim am Rhein and last but not least one from Munich. This is an interesting hint for the German debate about Munich aiming at the positioning to be the B2B startup marketplace especially in software. I will also note that the Munich SaaS company has a female CEO.

What are the German SaaS start-ups doing?

After the general description of the data set, we now do so straight to the business observations.

Focus is on enterprise SaaS

A quick screen of the websites shows that all of the companies are mainly focusing on enterprise customers. However, it is interesting that you actually do not find an orientation of the product along the usual business processes claimed to be taken away by SaaS like CRM, EPR, accounting, human resources, project management and all the other abbreviations on this list. The solutions offered show several different approaches to pain points and problems for companies these SaaS start-ups want to solve.

A quick website screen is not a due diligence or intensive analysis. Nevertheless - three thoughts/impressions remain after the check that are of general interest for SaaS.

Positioning an MVP around a pain point vs. process integration?

As there are few data points about this issue, I will take that opportunity to point out what our experience is talking about SaaS with the market participants.
The thesis and discussion point is that it might not be enough - especially in the enterprise SaaS sector - to identify a problem and pain point. Because even if the individual SaaS solution is great, you might sorted out by a workflow process orientation in the buying decision process of enterprises. You might want to check this discussion about today's enterprise SaaS vendors (second part) for more detail.

When you integrate your SaaS solution, you might prefer being old school

Ingrained in the established process question is another issue. Randomly picking up one of the SaaS start-ups, they thought about integration, but focused on mainly - in this case payment - other top tier start-ups.

Thinking about the average IT-buyer in Germany, the question comes to mind that this might be simply an overkill of newness, because the probability of the German SME using one of these new payment methods might be relatively low.

Is SaaS sales all about online conversion?

Talking about SaaS sales, I want to point out one last general observation after having gone through the eight webpages (and many more e.g. preparing for Web Summit)

By definition, a SaaS webpage represent even more an immediate sales pitch. However, I did find few descriptions, or catching feature lists that helped me understand immediately what the product is about. In addition, in many cases there was no pricing table.
For a segment that should rely online sales only (at least in theory) in order to reduce customer acquisition cost that observation was striking.
But it might be very well explained with the reality that enterprise SaaS sales oftentimes is direct personal sales. Maybe the webpages are only reflecting this gap between SaaS theory and what works in Europe.

With this, I end the analysis of the first snapshot of SaaS in Europe according to Web Summit data.
If you want to meet @Web Summit check out this page and the interview opportunity.