The first edition has just been published. Finally, and in the process with some glitches. And already the second editions is supposed to follow. Here we go. As so many concurrent topical events happen, I decided to focus, in this edition, on a meta topic.

The bubble that … did not burst - yet

The New York Times featured an article about VCs talking for years about a bubble,

which until now did not burst. Not a European tech topic, at least according to media here, but in conversations again it has been often mentioned in the last week(s) and it has been a recurring theme in the last years. Thus, is there a global or US or European bubble in tech finance?
First, a more factual classification: For a few years, my team and I argue that sooner or later the current tech cycle comes to an end. VC investment is at the heart at capitalism, so it is cyclical (the science behind that haven been studied) which means it follows a trend and comes to an end at which there are unreasonable, overvalued transactions, the trigger, not the cause. This is a surprise to linear thinking people, but does cyclicality automatically mean a bubble? Well, this is difficult to tell. First, it strongly depends on the definition of bubble. Is this about professional investors losing money on bad, overvalued deals or a general decline in an asset class resulting in larger implications to wider markets like in 2021? As with many arguments in finance, the question is much more complex as different camps argue and the arguments quickly become intermeddled.
Some high-level excerpt from internal discussions for clients like family offices:
It starts with a list of indicators: Valuations levels - An often-debated argument by the pro-bubble camp are ever the growing valuations and growing number of unicorns, and they are pointing to the disappointments e.g., with WeWork (there are some more indicators like new raised VC funds, Corporate VC joining and leaving and number of accelerators - we did a custom report on that based on a request).
Second argument, the ever-growing balance sheet of the central banks and negative/zero interest rates. In the absence (in the past of inflation) this is said to have inflated all asset values, meaning also private assets including VC investments.
Third, ever longer private rounds, relatively few IPOs, and clubs of VCs doing the same deals in several rounds – bias potential.
In other words, we can debate about the asset class specific risk by VCs gone wild, and/or a systemic risk of inflated assets prices and overvalued technology influencing price levels for VCs in general. These are very different debates, with different implications, and it gets interesting when you mix them or try to quantify the effects. One more interesting fact that makes us curious (and cautious) is that some narratives do not add up.
An overlapping number of people of the “bubble, inflation” camp presents the line of thought that now is the age of new technology, which is created at increased speed. In this view, technology is at large deflationary and tech companies are the only real assets (and of course crypto web 3.0 is the only future). How does this narrative hold with inflation that is only kicking in now, after 10 years of nearly zero interest rates? And what about real rates. How this could be the link in the macro puzzle, is a theory I am happy to explain, but too long for a newsletter. Back to valuations and dissonance:

A proxy of the possible valuation mismatch is Kathy Wood’s EFT, the public proxy of tech progress (which her team claims to understand and predict) in portfolios. Public markets discounted her tech bets (while there is also much about general asset management lessons in the story), triggering the question to what extent private tech assets should/could follow based on the assumption that we find some comparable in terms of valuation.
Turning to Europe, the question is anyhow if one can consistently argue that European VCs did a series of overvalued deals? Which again would violate the narrative that European VCs are way more risk-adverse than their US counterparts.
So, I leave it with the hint we are more likely at the end of the current tech aka VC funding cycle and when we spot cognitive dissonance in the (European) VC world, we will write about it.

Talking about cognitive dissonance, there were some nice rounds in Europe. Shifted reported here about 1800 rounds in Q1/2022 and about 30bn invested. Some very recent examples to link to the past week:
• News is the German based football media company, OneFootball, raised ≈€150 million at a valuation, making it a unicorn.
• The parcel locker service Instabox (Sweden) has raised $190 million for expansion.
• ArK Kapital received a €150 million senior secured debt facility from Pollen Street Capital (they do finance).
• Oster, a distributed HR platform from London raised $150 million in a Series C funding round.
• Finally, I want to list the Italian investment firm Investindustrial. It allocated €120 million into electric hypercar and vehicle components maker Rimac.

And since it is my newsletter, I also add three examples from Q1/2022

Thoughts: While these are respectable numbers for the European ecosystem system (the US had $ 70bn in the same quarter) some perspective:
A lion share went to Fintech (8bn) followed by health and transportation, only then energy (2bn) which is the theme of today. And “the Iceventure contrarian always looking for overlooked opportunities” inquires where do we see the (AI based) energy I nuclear I gas founding teams in Europe raising stellar rounds? On this question, Voltstorage, a German battery startup (had them on Battery-Stammtisch) is featured in the NYT. Bottom line: investors are chasing quick returns financing NFTs (not useful) while battery companies (useful) that really matter do not receive funding to scale in Europe. This reminds a bit of the “real innovation” debate from some time ago in Germany/Europe.
In consequence, one might debate if the fact of 8bn allocated to fintech vs. 2bn in energy (energy should by its industry nature require more capital) can also be used in a comparison to shed light on the first observation here, aka web 3.0 is a bubble. At the same time the NYT article justly includes a reminder that in fact there was a time in VC when cleantech was considered the next big thing and major (US of course) VC names invested in it, and failed. As written last week, tech is full of unexpected paths and VCs do not finance R&D, but want to finance winning companies. In many cases, opportunity is created by changing contexts and political decisions, not disruptive tech.

For example, price level matters and the last time the oil price was above $120 the fracking industry was born, a reminder that things often do not work out as predicted by the wider public. BTW, if the argument holds that AI is the playground leveler everywhere, it should be applied equally to all technologies while we see what turns out, including conventional combustion.

Netflix's outlook illustrates not all tech is tech

Speaking of surprises, Netflix went down 40% after it lost subscribers for the first time and expects more dropouts. Last week’s hero Musk explains it with “Netflix wokeness”. I think it is a good reminder that a number of tech startups and young companies in the end are not so much about tech, but conventional business models, while they apply tech. We call this second order digitalization business models. Having started with macro and the valuation question, just to mention that Fintech is such an example of digitalization. You apply the latest tech, but one does not get rid of banking risk (as the crew at N26 figured out).
With this, I end pointing to the topical charts of this week. Hope you enjoyed the food of thought. 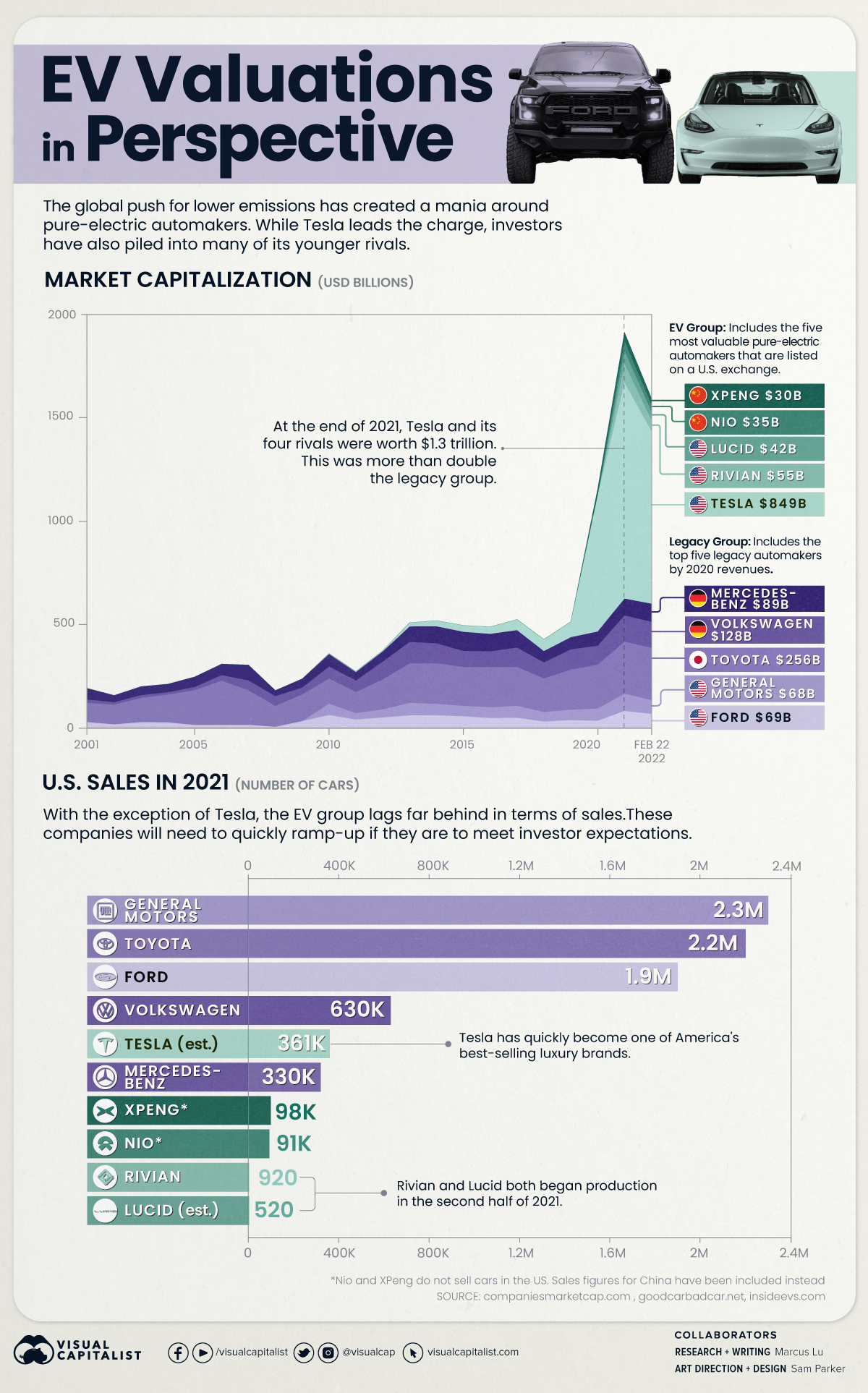 This week's readings are a bit a more selected collection than interesting articles around the theme in the observations.

Stock Market Valuation with Real Options:: lessons from Netscape - I am not sure if this is the original research piece, I remember. But this is a classic in corporate finance on IPOs
Netscape: The IPO that launched an era - and the Netscape story, always worth to read and remember, when Microsoft was bad and to be subject to regulators, IE evil and a lot of tech not invented
What We Often Get Wrong About E-Commerce—And Why It Matters -