After digging into the software as a service data provided by the Web Summit team I was of course also very interested to examine the data about the participating Fintech start-ups. Therefore, I took some time last night to look into it, providing some of the insights here.

A snapshot of the European Fintech space (participating in Web Summit)

First, I describe the data set available: 93 startups are listed in this segment of Fintech out of 2081 start-ups in total. This means about 4.7% of participating start-ups are in Fintech. 61% are European Fintech start-ups meaning 2,74% of all participants.

The number might be a bit sobering seeing the number of 2000+ start-ups and the currently generated media hype about Fintech. I do not have a particular interpretation of the low number of the 4.7% as with in the case of SaaS, but guess it also has to do with the fact that financial services are extremely competitive with demanding domain knowledge.

Now the distribution of the Fintech startups per country. Prior to citing the numbers, I lay out some expectations. For Fintech, I would not expect Germany to be leading in Europe, while I would expect to find many Fintech startups from the 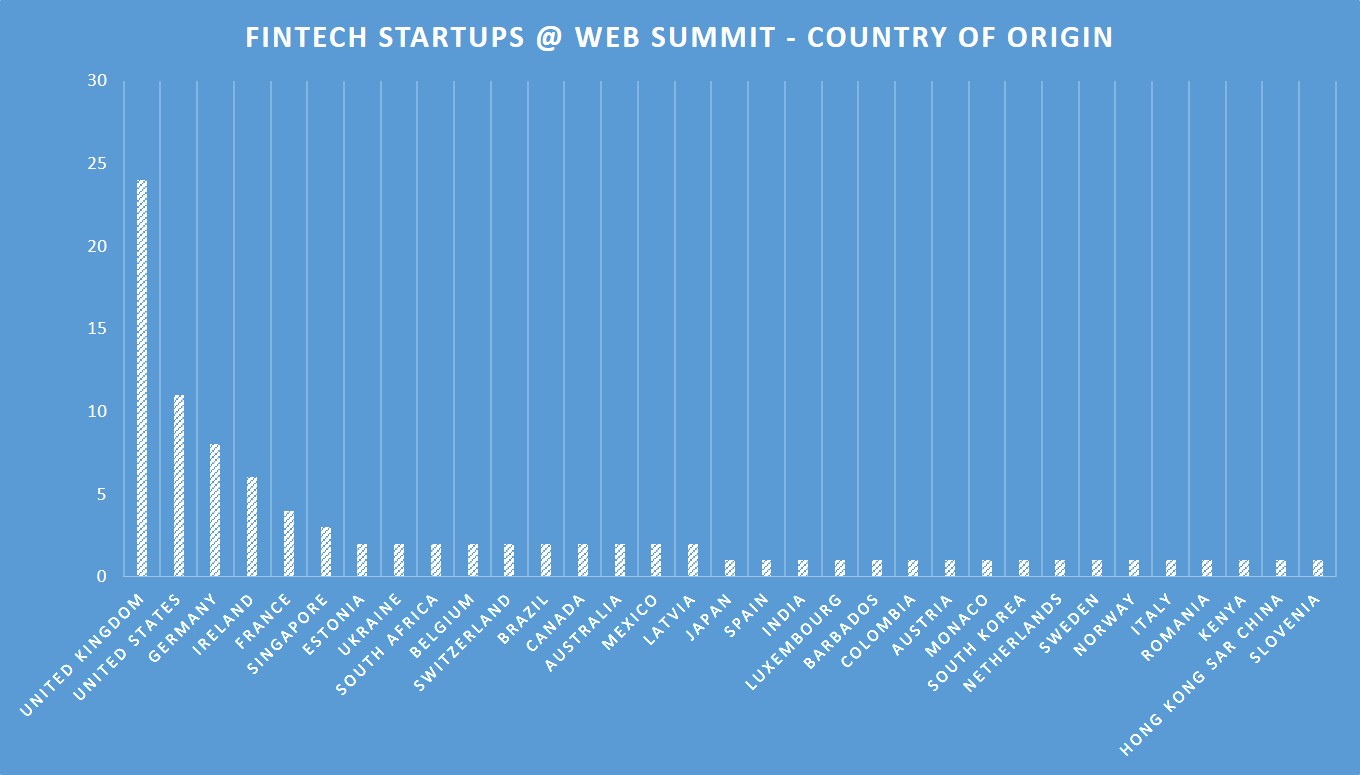 traditional financial centers of Europe like UK, France, Italy and Luxembourg. I think this is a valid expectation as

As I have been invited for media coverage and I am always curios I decided to not focus on interviews with speakers but give you - the start-ups - a voice.
Just fill in the form and tell me, why you should be interviewed or we should meet. I am not interested in product pitches alone, but also in the problem you solve and how your solution fits in our today's context.

a) normally one can observe Start-ups in a particular industry around the established players (an important insight into ecosystems) and
b) also for startups it makes sense to be in a kind of cluster as it does for established companies. Here Berlin is not the right address, I would argue.
Thus, here is the data: United Kingdom takes the lead with 24 participants, followed by United States with 11, Germany 8, Ireland 6, 4 from France and then again as with SaaS a wide tail of international and European startups.
Especially concerning the United Kingdom, I think the European financial hub argument and start-up clustering around established companies applies. Thus, I would not be surprised to find all of the 24 startups actually being based in London when diving in deeper into per country data, which I did not do. Then I think United Kingdom and especially Ireland can be explained partially by the fact that the conference is taking place in Dublin.
The second place for the United States is also in line with expectations as the U.S. is and continues to dominate the startup field in all relevant sectors.
We have Germany with eight (a bit more than I was expecting) and France sending four.

But it is a real surprise that Switzerland ( a recent Roland Berger study listst 54 startup participants) is only sending one Fintech start-up as well as Luxembourg and Italy. These are all countries that have a long and established (or recent) banking tradition and is an important sector. In the case of Italy, it is even a double listing with Spaziodati we also found in the category of SaaS.

The level of Fintech funding

After the geographical distribution, I of course looked at the funding ranges the startups disclosed. Very similar to the SaaS we see 52 startups (about 56%) in the range of zero to €500k funding. However the number of startups in the following ranges 500k to 1 million, 1Mio to 3Mio and 3Mio+ is almost the same being 16, 12 and 12. 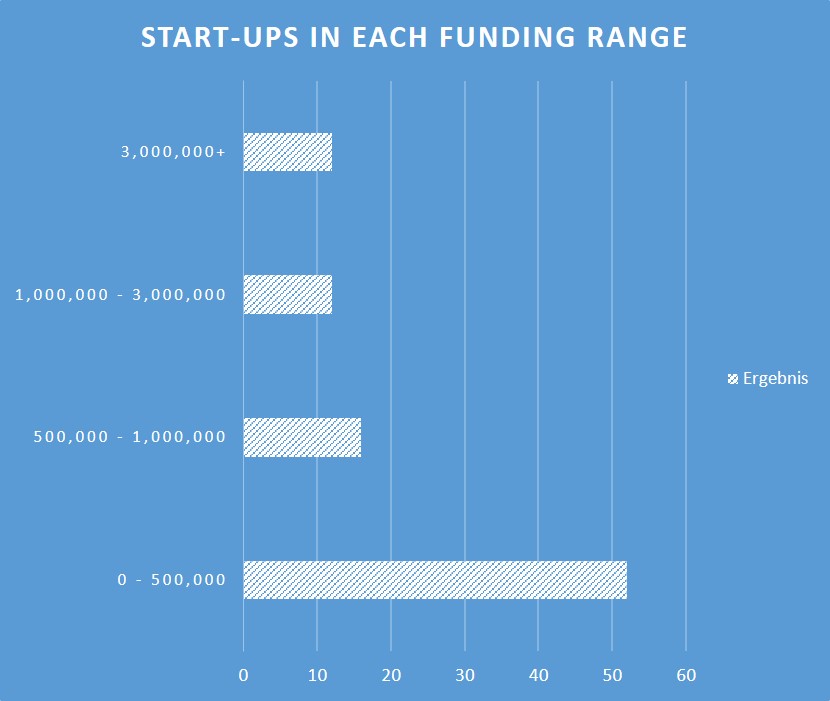 As we have to keep the selection bias of an event in mind, I do not want to overstress the fact that far more start-ups compared to the SaaS sample have a higher level of funding also in the upper range. So it could be that it is due to the selection, it could also be that investors are willing to put more money on the table as they might think in faster success compared to SaaS with its long-term subscription business.
Besides this, the level of the startups funding leads to three observations:

The first observation is that unlike for the SaaS sample, there is no benchmark for a minimum requirement in order to get your Fintech started and to IPO until now. Thus, it is difficult to argue with a standard. In consequence, I decided to look at valuations. As it is our standard approach in a first quick screen, I am not interested in exact numbers, but a rough estimate to get an impression knowing that it works with some strong assumptions. Applying this, total valuation of all start-ups can be calculated as 470 Mio., when one assumes the average expected rate of return of 30% demanded by investors. This seems very low compared to an average balance sheet of a mid-size German Sparkasse.

Secondly, (obvious for all people with knowledge of the financial service sector) it becomes evident with such a funding that the approach of Fintech start-ups is so far to not take financial assets on your own books on average (one company in the top tiers sample seems to do it).
I think this pretty well illustrates the market entry strategy and class of solutions of most Fintechs that most likely allow avoiding many regulatory issues. This is of course a clever strategy, but at the same time, the interesting question arises with respect to the claim to disrupt traditional banks and take market share. Eventually taking risk on your own books and delivering the tasks of a financial intermediary will be required as this is the traditional role of a financial player and you cannot hide this behind tech.

This brings me to the third observation, which is asset size and the disintermediation question. Minimum required capital for real banking starts at 5 Mio EUR, but you want to have way more for operations and in order to hand out financing with a decent spread risk. Then you grow your asset base with all associated risks. And with size comes the need to offer additional products to do cross selling and level your business field risk.
This is the reason one finds on average many universal banks and only one or two specialists per product or sector category. An answer to this in Fintech business models will be the key element as they try to rewrite 70 years of modern banking histroy.
This of course are only general remarks, but necessary to provide the right perspective to Fintech, that sometimes seems to (naively) believe they could circumvent bank regulation and the history of banking only with tech.

In addition, it is worth to think about the adoption channel of Fintech (see e.g. this article here), but as it is not directly related to funding, I only point it out for further elaboration. 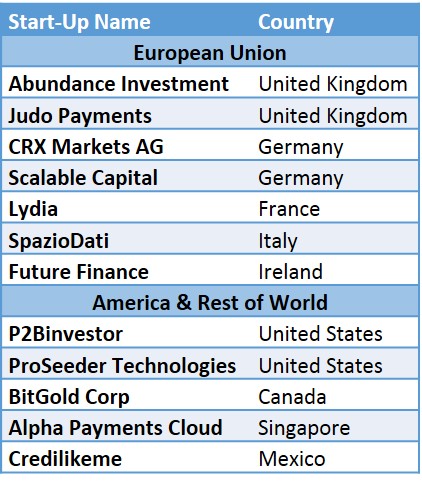 Now I focused on the geographical origin of startups in the founding range 3 million+ to figure out if your location plays a role. Out of the twelve, two are from the United States, two from United Kingdom, two from Germany. Singapore, Mexico, Canada as well as France, Italy and Ireland send one start-up each.

Two things become obvious from the 3Mio+ data. Fintech start-ups can be started and (significantly) financed almost everywhere. In conclusion competition in banking could even further increase.
Then, the rootedness in financial hubs seems to be confirmed e.g. with the start-up from Singapore that is an important regional financial spot.
Within financial services payments, payment related financing and investment are the areas of choice in which the start-ups provide new services and attack established financial institutions.

What about German Fintech?

The first startups in the three 3 million range is CRX Markets. It offers dynamic discounting and supply-chain financing solutions.
The second startup is Scalable Capital, a marketplace offering private retail investors investment strategies without hassle.
I think both start-ups albeit very different in their products characterize the current state of Fintech as outlined above.
Also the remaining five start-ups are no real surprises except that I would not classify two companies as core Fintech start-ups.
As with the SaaS sample it is interesting to note that start-ups come from all over Germany with Berlin and Munich represented twice.

With this, I end the analysis of the first snapshot of Fintech in Europe according to Web Summit data.
If you want to meet @Web Summit check out this page and the interview opportunity.