One of the big topics 2018 is the blockchain. The large demand of established companies for solutions, so-called enterprise blockchains, is particularly noteworthy.
This differentiates this technology from others that we have worked on in the past.

A large range of questions around Enterprise Blockchains from enterprise customers

One of the big questions which remain unanswered - both in the use cases proposed so far, and in the questions posed to us - is whether the blockchain is about IT modernization in general, or about a specific disruptive business model, made possible only by the blockchain.
Additionally, there are plenty of other questions concerning this relatively new technology.
Here are a few of them, which have been posed to us and by us:

Late this year, Iceventure will publish a study on the topic. However, for now, we will provide some insights into the ecosystem of German enterprise blockchains today. 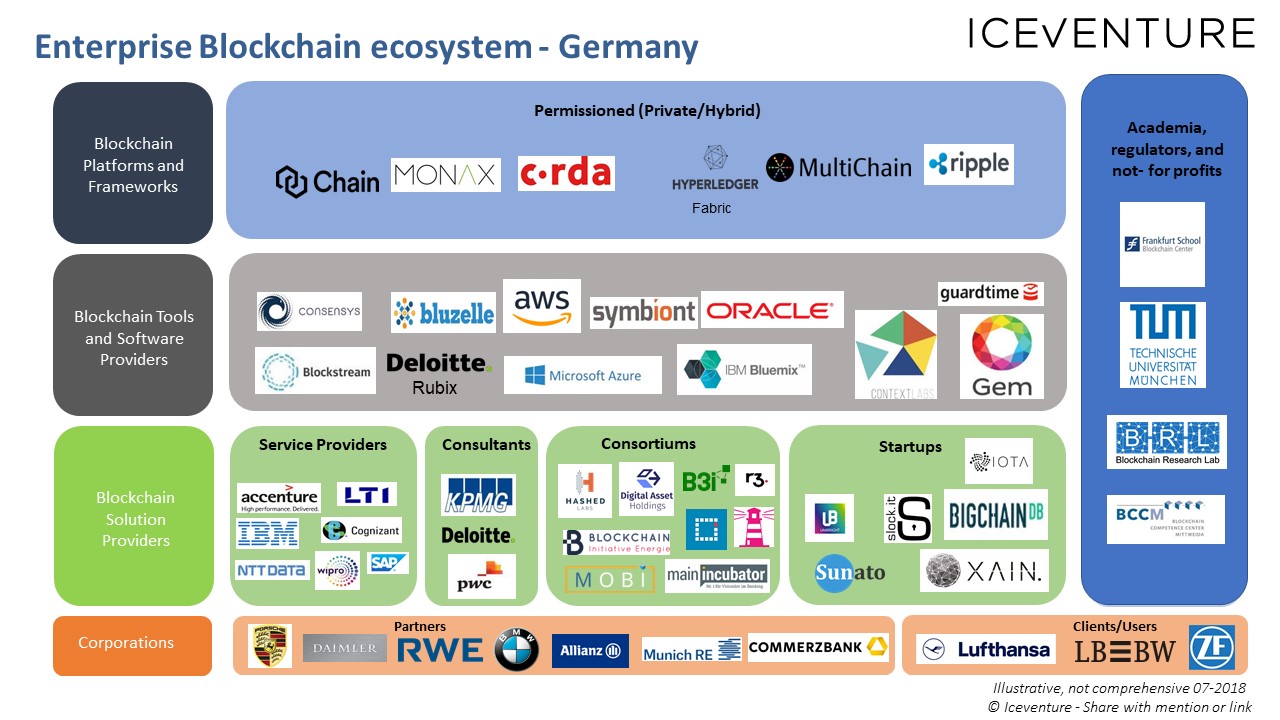 Important findings from the blockchain map

There are several German startups, whose products or processes are based on blockchain; In total, we found over 80, of which roughly 50 are relevant for enterprises. Of these, 20% are focused specifically on enterprise infrastructure.

We can see some aberrations from the way that other technology ecosystems are structured. The number of established IT companies and consultants is higher than usual. Globally speaking, all the large tech firms – except for Apple and Google – have announced or launched blockchain projects or are offering blockchain as part of their product lines.

Particularly in Germany, the high number of industry cooperation is noticeable. Large corporations from the German and European area act both as clients and partners. The focus lies on B2B applications, while B2C cases are limited to the automotive industry. At the same time, the interest from transaction intensive industries like the finance and insurance industry is clearly visible.

Blockchain consortiums are the preferred approach for Enterprises

Quite often, we see that companies join one of the consortiums (there are nine significantly large ones). The logic behind this is that the risk is commonly shared. However, it also points toward the firms seeing the blockchain more as an IT upgrade, where the advantage of partnering up is higher, than as an opportunity where new business models can be exploited. These consortiums are working on their own solutions, as opposed to using one of the aaS solutions by AWS, Oracle and others.

As an interim summary, we can say that the speed at which large companies picked up on the blockchain goes to show that more attention is given to digitalization, and that quick action is seen as a valid strategy. In general, industry giants join the movement quite late, when the technology has been proven to work effectively on a small scale. The fact that this is not the case here points to a change in culture.

with research by Timothy Robb

see also: The Enterprise Blockchain - Costs and benefits for enterprise use cases